The Land of Boudica 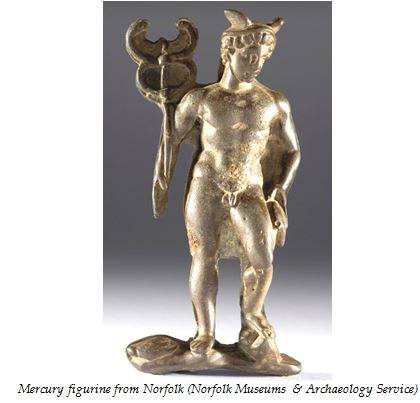 The day will look at aspects of Roman East Anglia, predominantly Norfolk and Suffolk, showing the episode in its wider context. It will start with a consideration of the pre-Roman Iron Age and will also look at the region in the context of its role within the Roman Empire.

About Dr John A. Davies FSA

Dr John Davies has been Keeper of Archaeology at Norwich Castle Museum since 1997 and is now also Chief Curator for Norfolk Museums & Archaeology Service. He has worked as an archaeologist in Norfolk since 1984. During this time he has been involved with the promotion of a positive liaison between professional and amateur archaeologists, in particular metal-detector users. He is a specialist in the coinage of Roman Britain and has published widely on the subject of coinage from British archaeological sites. His most recent research interests include aspects of Roman Norfolk and Iron Age East Anglia.

Some suggestions for further reading
(useful but not essential)

Please phone or email to check the availability of places. Study Days are £36 per person, which includes a full day of lectures, access to the NT site, parking, coffee and tea throughout the day, and access to the NT exhibition. Once you have reserved your place please send payment to confirm the booking. For your first booking please complete the application form to ensure that we have recorded your contact details correctly.

Email cliff AT wuffingeducation.co.uk
(replace ‘AT’ by ‘@’ in order to send email – we used ‘AT‘ to avoid spam robots automatically sending us emails)

Stay up to date:

Following government advice we have cancelled all Study Days for the foreseeable future. We will hold any payments as credit for future Study Days but please click here if you would prefer to request a refund.